Share a memory
Obituary & Services
Tribute Wall
Read more about the life story of Patricia and share your memories in the Tribute Book.

Patricia Bruen Tacelli, 90, of Winthrop, MA passed away peacefully on November 17th at Compass on the Bay in South Boston, MA.

Patricia was born in Roslindale MA, daughter of Pierce and Margaret (Hallissey) Bruen. She is survived by her sister, Barbara McGrath of Osterville. Patricia was united in marriage to her life anchor, the late Dr. Richard S. “Doc” Tacelli.  Patricia cherished her family and has a large, devoted clan consisting of five children and their spouses: Richelle and Arthur Flavin of Winthrop; Martine and Tony Amundson of Barnstable, Christopher and Sandra (Austin) of Santa Barbara, CA, Georgeane and Michael Coleman of Winthrop and Patrick "Rick" and Kimberly (Christie) of Needham.  She was Gram to Alyssa (Amundson) and Ben LaMora of Duxbury, Richard and Rebecca Amundson of Orlando, FL, Alexis Flavin of Melrose, Ariana (Flavin) and Sean Morrow of Holden, Vanessa (Flavin) and Ricardo Navarro of Winthrop; Aidan and Ethan Coleman, Siena, Roman and Marco Tacelli.  Patricia was a great-grandmother to Leo and Isaac LaMora, Rhys, Louisa and Simon Navarro, Nathan and Rosie Morrow, and Summer and Cape Amundson.

Her family describes her as a ‘renaissance woman’, who was a natural leader with influence and charm. She instilled in everyone the belief that they could do absolutely anything if they set their mind to it. “Go for it!” she would often say.

Patricia was born in Roslindale, MA and attended Notre Dame Academy High School, Massachusetts College of Art, Salem State University where she received a Baccalaureate in Education and Lesley University where she received a Masters in Literature.  Patricia owned and operated the Winthrop Country Day School in Winthrop, MA for many years.  Patricia was an innovator and ahead of her time in environmental and feminist causes. She was creative and skilled in both business affairs and the arts.

Affectionately known as “Ms. Trish” in Winthrop, she was very active in the community and held leadership positions in the Winthrop Art Association, CREW Poet’s Society, Mass Association for the Blind, Winthrop Commissions on Disabilities, Winthrop Senior Center, Winthrop Catholic Women’s Club, St. John’s Choir, the Animal Umbrella, the PTA and many other groups.  She had a passion for education and was an accomplished artist, poet, author, historian and wordsmith.

She has  been a beacon of culture, compassion, and commitment to the town of Winthrop for decades.

A Celebration of Patricia’s life will be held in the May of 2023 for which all are invited.  In the meantime, “Peace, Joy and Blessings” to all!

To send flowers to the family or plant a tree in memory of Patricia Bruen Tacelli, please visit our floral store. 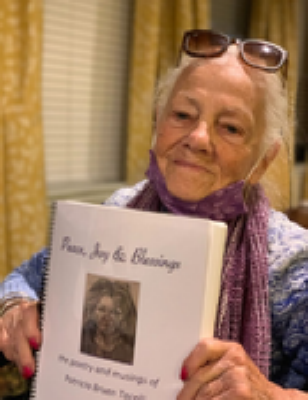 In Loving Memory Of

Look inside to read what others have shared


Family and friends are coming together online to create a special keepsake. Every memory left on the online obituary will be automatically included in the book.

You can still show your support by sending flowers directly to the family, or by planting a memorial tree in the memory of Patricia Bruen Tacelli
© 2022 Ernest P. Caggiano & Son Funeral Home. All Rights Reserved. Funeral Home website by CFS & TA | Terms of Use | Privacy Policy | Accessibility